University students compared their knowledge of Chinese language and culture 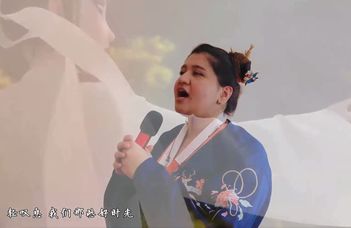 The Chinese Bridge language competition is held annually in more than 20 countries in order to have the bests competing in the Chinese finals. The competition is open for both secondary school and university students. The Hungarian finals are held every year in a different Confucius Institute and secondary school. This year the finals for university students were held at ELTE's Confucius Institute with the contribution of the Embassy of the People's Republic of China in Hungary. Due to the pandemic, for the safety of the participants, the event happened online on 28 May.

The finals for secondary school students was held in the Magyar−Kínai Két Tanítási Nyelvű Általános Iskola és Gimnázium (a primary and secondary school with Hungarian and Chinese teching languages).

The two finals had a common welcome ceremony, during which Qi Dayu ambassador greeted the participants, then Prof Imre Hamar, Vice-Rector for International Affairs, Director of ELTE Confucius Institute, and the special guest, Klára Zombory, sinologist and translator, President of the Hungarian-Chinese Friendship Association, made their speeches. Last, but not least, Zsuzsanna Erdélyi, the headmistress of the Magyar−Kínai Két Tanítási Nyelvű Általános Iskola és Gimnázium greeted everyone. The host of the programme was Li Denggui, Chinese Director of ELTE Confucius Institute. After the speeches, Chen Kun, educational advisor of the Embassy of the People's Republic of China in Hungary, opened the 20th Chinese Bridge competition.

The 11 competitors presented their knowledge in two categories. They came from 5 different universities, all have Chinese education: ELTE, University of Miskolc, University of Pécs, University of Szeged, and Pázmány Péter Catholic University.

The participants delivered their speech on the topic of "One world, one family", then they presented performances connected to Chinese culture. Our university was represented by Nikol Janszky-Máriás, Judit Sarolta Szakály, and Noémi Zsikla, students of Chinese language and culture at the ELTE Institute of East Asian Studies.

The judges gave the first place to Samaneh Raiss Shaghaghi (University of Szeged), who will represent Hungary in the Chinese finals. Boglárka Kántor and Bernadett Spisák from the University of Miskolc shared the second place, while Nikol Janszky-Máriás (ELTE), Izabella Szabó (Pázmány Péter Catholic University), and Noémi Zsikla (ELTE) shared the third place.

The performances of the competition are available HERE.