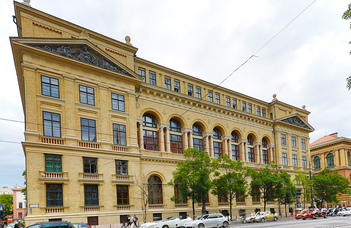 The Hungarian Academy of Sciences (MTA), as part of its public responsibilities, can finance academic research groups at higher education institutions it has signed agreements with. The majority of the research groups supported by the MTA have been established at Eötvös Loránd University.

The research project supported by MTI TKI of the MTA-ELTE History of Universities Research Group is being carried out at the Faculty of Humanities and the University Archives. The research group is divided into three sub-projects. The medieval section is headed by Prof. István Draskóczy, the modern section by Honorary Prof. László Szögi and the 20th century section by Vice-Dean and head of the department and institute Csaba Borsodi. The goal of the research group is to analyse the as-yet unexplored areas of the history of Hungarian higher education and release the results in line with international standards. The research is in line with the cooperation initiated by the International Commission for the History of Universities in 2012, which aims to link the national student databases of the Middle and Modern Ages.

The main goals established for the five-year period by the research group are to compile the articles of Hungary’s Dictionary of Medieval Latin and publish them in a single book volume, as well as the publication and preparation of further volumes of the critical edition of the collection of the works of Janus Pannonius. Further goals include the operation and continuous upgrade of a bibliographic database of Hungarian ancient studies, as well as the management of future talent.

The research group is based in the Institute of Hungarian Literature and Cultural Studies of the University of Debrecen. The Textology Research Centre has been active as an academic research centre for some four decades. Its main function at first was to compile critiques of the works of Mihály Csokonai Vitéz, but has expanded its activities over the past decade-and-a-half. It launched its own series of records (Csokonai Library. Records) which focuses on the period as a whole. With the completion of the book edition of the critiques of Csokonai’s works, the research group shifted its focus to compiling an electronic edition of the critiques and to publishing the life work of author and poet Ferenc Kazinczy. The research group currently offers paper-based and electronic critiques as well as digital content. The programme is carried out in the form of broad cooperation, which has brought researchers from the Szeged and Budapest peer departments as well as the researchers of the Academic Institute into the project. These teams have been complemented by groups of graduate and post-graduate students. The partners regularly conduct professional talks and organise joint seminars for students. The application period starting in 2007 brought about changes in the organisational framework of the research group. It now operates as a consortium with collaboration between the peer departments of the Budapest, Debrecen and Szeged universities.

Launched in 2009, Momentum is a programme put together by the Hungarian Academy of Sciences (MTA) aimed at keeping the most talented Hungarian scientists at home or incentivising them to return. The programme has so far allowed 22 researchers to found research groups at Eötvös Loránd University. After being financed by the MTA for five years, Eötvös Loránd University has continued to fund research ongoing within the groups.

The research group is set to study the changing and diverse relationships between the everyday existence, local social functions and mentality of the Catholic and Protestant lower clergy of local communities in 18-20th century Hungary and Transylvania. The group will primarily use case studies to explore the culture mediation role of the lowest-ranked priests of the church hierarchy. They aim to uncover the complex problematics of national identity, minority existence, local religion and coexistence within a denomination over the course of the three centuries via archival records.

the hungarian middle ages in a european context: analysis of the earliest written records (2018–2023)

This research group studies perhaps the most impactful cultural phenomenon of the European Middle Ages: liturgy. They aim to open new pathways in both Hungarian and international scholarship via the historical and comparative analysis of the topic. The group has established the USUARIUM database which is probably the largest and most useful database of records on Western liturgy. However, not even the most useful database can substitute for the analysis and synthesis of large amounts of data, which is another goal established by Miklós István Földváry.

Coarticulation is a natural phenomenon in connected speech, it may be defined as the overlap of the articulatory gestures of neighbouring speech sounds. The tongue as an organ in our body is usually regarded as one unit; however, its specific regions (tongue tip, tongue blade and tongue dorsum) may behave as different articulators. Therefore, lingual coarticulation refers to both the simultaneous and connected gestures of the tongue and other articulatory structures (e.g., lips, jaw, velum, or glottis), and also to those of the particular regions of the tongue. Hence, lingual coarticulation is a diverse field of research that may be approached from many perspectives. The main goal of the research group is to analyse coarticulatory effects in Hungarian sound clusters. This entails the use of modern tools like an electromagnetic articulograph or an electroglottograph. Running the various tests requires the establishment of a well-equipped laboratory.

Literary historian Gábor Kiss Farkas researches the relationships between the Hungarian humanists of the early Modern Age. The academic who has returned from Austria and founded a research group at the Department of Old Hungarian Literature of the Faculty of Humanities plans to compile an encyclopaedia of humanists who lived in Hungary between 1420 and 1620 with the support of the Momentum programme. He plans to analyse the data gathered from the analysis of the 400 bibliographic records in a social and intellectual historical context and publish previously unreleased texts. “What role did knowledge migration play in the various time periods, can we speak of a brain drain in Hungary at this time, or did the domestic academic community benefit from the peregrination seen in the early Modern Age?” These are the questions Gábor Farkas Kiss looks to explore with his research group. Farkas Kiss says the analysis of the topic also highlights the view that in addition to individual talent, the continuity of institutions and research centres can be the biggest help in the preservation of cultural heritage.